Established in 2002 the Gertrude Editions are an annual series of specially commissioned limited-edition works of art.

Click here to see Gertrude Editions that are available for sale. 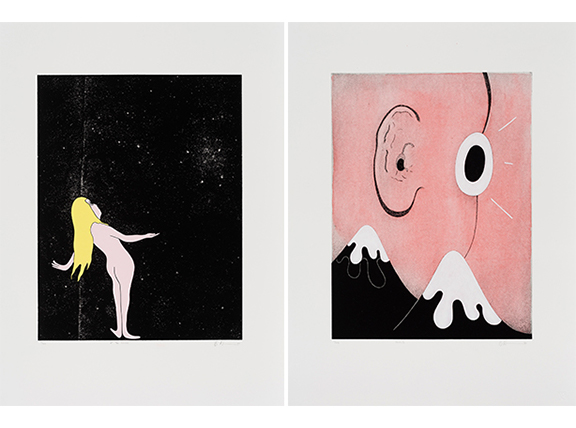 Brent Harris was one of the first studio artists in the Gertrude Studio Program, from 1987 – 1989, and has since forged a significant career spanning three decades, methodically evolving a practice of unique distinction. Harris has gained renown for both shifting and revisiting his artistic language with prescient surety. Working principally in painting and printmaking, Harris has defined an artistic practice of idiosyncratic aesthetic trajectory that is distinct in its progression and capacity for historical reflection, combining motifs and symbolism relating to religion and mythology in his distinctive, graphically bold, yet nuanced style.

For the 2020 Gertrude Edition, the artist has worked with two master printmakers to produce two new works, each available in a limited edition of 25.

At the Door, 2020 (left) is a photopolymer gravure etching with screen-printed elements, made with master printer Trent Walter at Negative Press, Melbourne. On the work, Harris says: She stands as avatar, at the threshold of a possible deep cosmic dimension, wanting for meaning. Yet the space is disturbed by a vertical pictorial stutter, throwing some doubt upon the seamlessness of this vision, the question of life.

Peaks, 2020 (right) is a photopolymer gravure etching, individually hand coloured, made with master printer John Loane at Viridian Press, Benalla, Victoria. On the work, Harris says: As in a dream, floating above a landscape, disparate elements form themselves into a large head. This emerging physiognomy might depict a developing consciousness, one in relation to a terrain that, in waking reality, must inevitably be traversed.

The prints are available for purchase for $1200 each, unframed. Gertrude is currently accepting reservations for works, which will be made available for pick-up or delivery from mid-January 2021.

Gertrude has worked with United Measures to develop an artist-approved framing option which is available at additional cost of $300. This framing method will present the work floated with a matt black finish frame with UV non-reflective glass (approximate dimensions 70 x 56 x 2.5 cm). 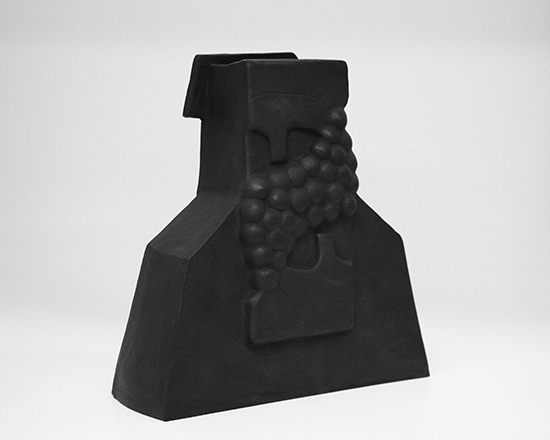 The 2019 Gertrude Edition is emblematic of London-based Renee So's long-standing exploration and repetition of the Bellarmine, a domestic vessel depicting a bearded man with origins in Rhineland during the 16th and 17th century. Created especially for Gertrude Contemporary, this sculptural edition of 50 has been individually hand-cast in black Jesmonite from a clay master.

Instigated in 2002, the Gertrude Editions are an annual initiative developed to raise funds in support of Gertrude Contemporary exhibition and studio programs, and to promote the connection between current Studio Artists and previous generations of leading Australian artists who have held studios at Gertrude Contemporary. 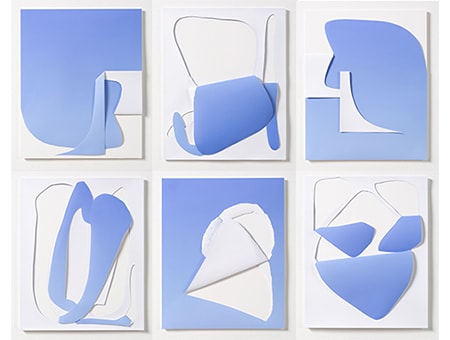 Price: $1650 each including custom blue framing by United Measures, Melbourne.

For the 2018 Gertrude Edition, Mira Gojak’s unique series of 50 works, Cutting Through (2018), presents photographs of the desert sky that have been variously perforated and folded. Shot at a single moment in time, each work captures the gradation of the blue sky. Slicing through each image, the artist disrupts the monochromatic ground, creating shapes and forms by folding the underside of the photographic paper through to the surface.

Editions are available for purchase Online or in person from the gallery.

Mira Gojak's work is held in the collections of the National Gallery of Victoria, Art Gallery of South Australia, Artbank, as well as the Monash University Collection. She was a Gertrude Studio Artist 2004 - 2005 and is represented by Murray White Room, Melbourne. 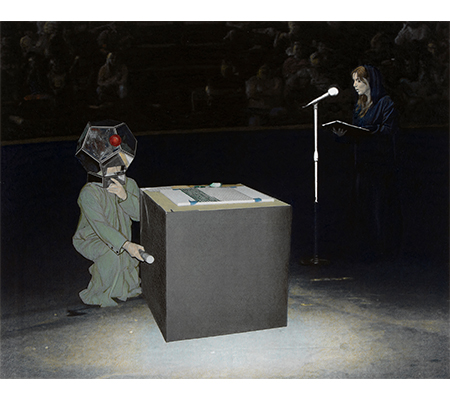 The 2017 Gertrude Edition has been created by leading Melbourne-based artist and Gertrude Studio Artist Alumni Damiano Bertoli, represented by Neon Parc, Melbourne. Bertoli has had significant involvement with Gertrude for almost two decades and is one of the most highly regarded artists of his generation.

There are 5 variations available for purchase, each in editions of 10. Each edition is printed on rag paper, individually hand coloured in pencil, box framed with black, stained Tasmanian Oak, dry mounted with UV resistant acrylic, and is 40x50cm.

The Editions are for sale for $1650 incl. GST and are available HERE 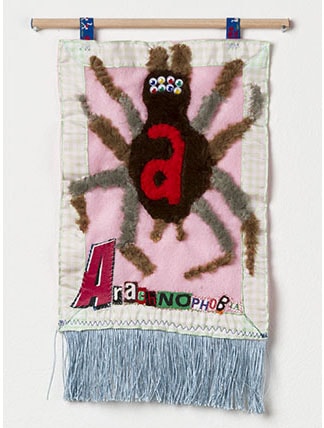 Gertrude Contemporary is delighted to announce that the 2016 Gertrude Edition will be produced by Paul Yore (represented by Neon Parc, Melbourne), who held a studio at Gertrude from 2011–2013. For this year's Edition, Yore has created 52 unique works on fabric—one for each lower and upper case letter in the alphabet—each representing a phobia or anxiety.

This year, Yore's Editions will be sold for $1650 each (inc. GST). They will be released for public sale at Gertrude Glasshouse on Saturday 26 November at the opening of Gertrude Editions (2002–2016), which will bring together all of the previous Gertrude Editions alongside the full set of Yore's 2016 Gertrude Edition.

Click here to see the Paul Yore Editions that are available for sale. 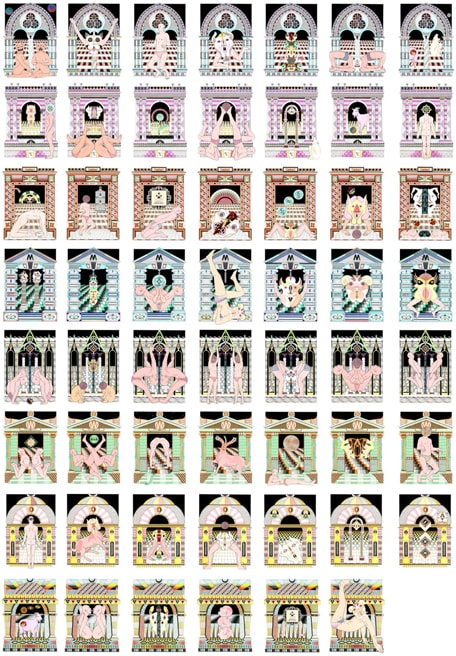 Gertrude Contemporary is pleased to announce that Jess Johnson is the 2015 Gertrude Edition artist.

The 2015 Gertrude Edition is a specially commissioned series of unique collages by Jess Johnson. Each work combines a hand-drawn figure or group of figures affixed to an archival pigment printed background, of which there are eight different variants. The background prints form part of Johnson’s inimitable repertoire of landscapes from parallel universes, which are inspired by science fiction narratives and their cover artwork, comic books, and videogames. These landscapes comprise jet-black skies, gridded floors rippling with primitive gradients, tessellating patterns in bricked architecture, mystical domes and colonnades. The figures are a cast of bald-headed men twisting and stretching in impossible contortions, and hybrid human–animal beasts. Johnson’s Gertrude Edition continues her explorations into multiple and co-existent alternative realities through drawing.

The 2015 Edition has been supported by Yanni Florence.

The artist would like to thank Nicole Breedon, Victor Kuskoff (Colour Square), and Vasili Kaliman. 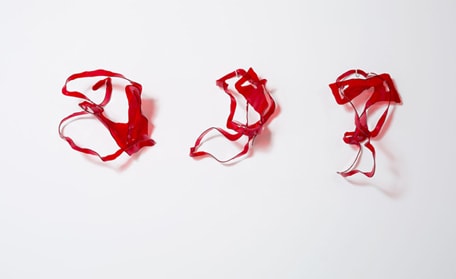 Gertrude Contemporary is pleased to announce that Anne-Marie May is the 2014 Gertrude Edition artist.

The 2014 Gertrude Edition is a specially commissioned edition of thermally formed acrylic sculptures by Anne-Marie May, each one individually hand-shaped by the artist. Continuing her investigations into materiality, May transforms acrylic sheets into dynamic arrangements of interlocking curves through a process of heating and folding. The reflections cast by the sculptures’ transparent surfaces give the impression of drawings in light and space, blurring the line between two- and three-dimensional form.

The work has been generously donated by Anne-Marie May and Murray White Room, Melbourne.

The 2014 Gertrude Edition has been supported by Yanni Florence. 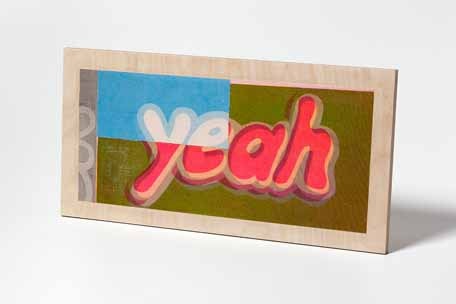 Gertrude Contemporary is pleased to announce that Jon Campbell is the creator of the 2013 Gertrude Edition.

The 2013 Gertrude Edition Yeah/Gertrude is a specially commissioned series of screenprinted works mounted onto plywood panels. Campbell has printed the word “YEAH” onto calico, and then cut, mixed and collaged the segments to create a suite of variations on his well known “yeah flag”. In proposing this affirmative text as a replacement for the official Australian flag, Campbell engages in what has been described as a “gentle activism”. With humour and feel-good optimism, he eschews strident nationalism in favour of an inclusive celebration of the small, the overlooked and the everyday.

Yeah/Gertrude will be on exhibition at Gertrude Contemporary during Gertrude Studios 2013, opening 15 November, 6 – 8pm and running 16 November – 1 December.

The work has been generously donated by Jon Campbell, KALIMANRAWLINS, Melbourne and Darren Knight Gallery, Sydney. 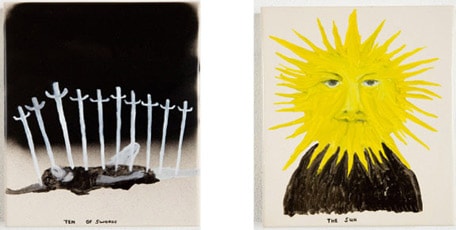 The 2012 limited edition artwork is by internationally acclaimed artist Richard Lewer, who has created 78 unique, hand painted works, each of which represent a Tarot card.

Comprising all of the cards in the Tarot deck these works continue Lewer’s investigations into the extremes of human behaviour. In each of the 78 works, Lewer employs his distinctive expressive painting style to engage us in the battle between good and evil, darkness and light, all seen through his viscerally humorous lens.

In creating the series, Richard Lewer referred to a number of historical precedents including the 15th Century Visconti-Sforza deck, one of the earliest surviving examples of tarot imagery.  Here, Lewer found common ground between narratives that have been central to his oeuvre and in imagery that for centuries has been used to reveal the self and divine the future.

Lewer is one of Australasia’s most eminent painters whose work has been shown extensively throughout Australia, New Zealand and internationally. His work features in significant national collections such as the Art Gallery of South Australia, the National Gallery of Victoria and the Museum of New Zealand Te Papa Tongarewa. He has had significant solo exhibitions surveying his practice at Monash University Museum of Art and at the Waikato Museum, New Zealand, as well as showing in a number of important group exhibitions at The Museum of Contemporary Art, Heide Museum of Modern Art and the Perth Institute of Contemporary Art.

The 2012 Edition has been supported by Yanni Florence.
The work has been generously donated by Richard Lewer, Fehily Contemporary, Melbourne and Hugo Michell Gallery, Adelaide. 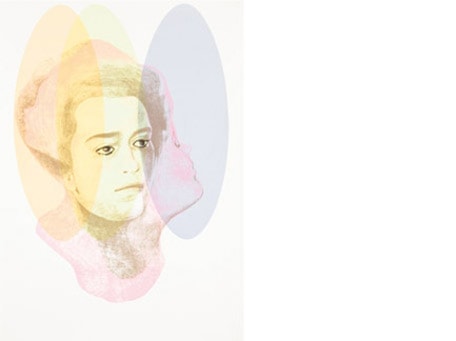 The 2011 Gertrude Edition Mirrorrim Sees is a specially commissioned digital pigment and screen print on Somerset paper in an edition of 50, signed and numbered by Michelle Ussher. Responding to the repetitive process of printmaking, the series combines 4 images in 10 permutations with 5 variations making each print unique. Mirrorrim Sees depicts the narrative of a three-faced woman relentlessly pursuing an object through a universe of parallel reflections. Ussher’s print plays with the infinite possibilities of perception in relation to fiction, holographic principle, alternate realities and contemporary theory. The work has been generously donated by Michelle Ussher, KALIMANRAWLINS, Melbourne and Barbara Flynn, Sydney. 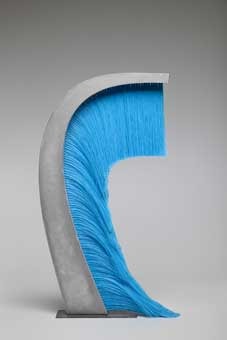 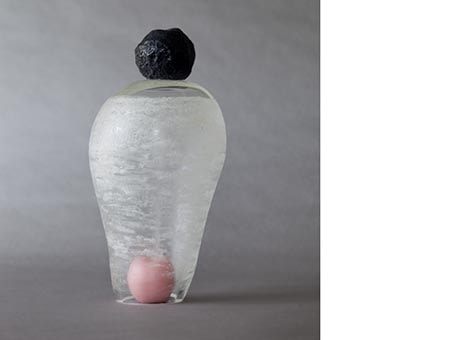 Comprising a new work by Benjamin Armstrong in a limited edition of 50, the 2009 Gertrude Edition is a wax and glass sculpture in three parts. As the glass has been hand blown, there are variations between the glass forms that make each Edition individual.

Special thanks to Philip Stokes and Liza Martin 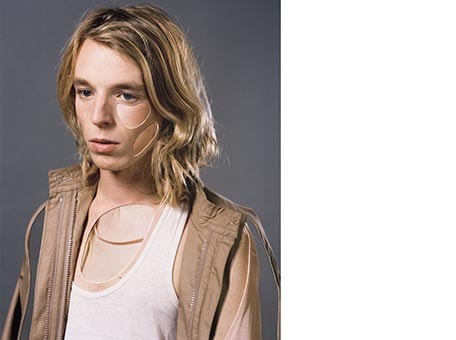 The 2008 Gertrude Edition is a new photographic collage by David Rosetzky, which combines two portraits to question the boundaries between self and other. This work continues Rosetzky's interest in layering and portraiture, and the relationships between interiority and exteriority, gender and identity, realism and fiction. 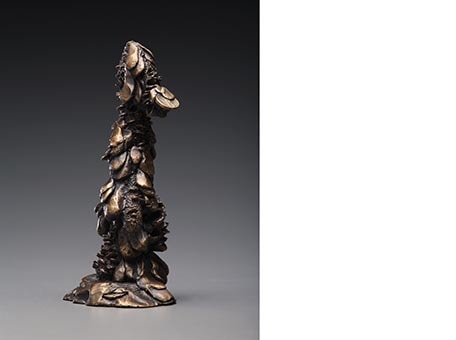 The 2007 Gertrude Edition comprises a new sculptural work by Nick Mangan - a bronze sculpture, cast from an assemblage of banksia pods, beeswax and coins. Inhabiting an uneasy space between growth and decay, totem and tourist kitsch, the work explores the environmental effects of culture on nature and the dubious progress of capitalism. 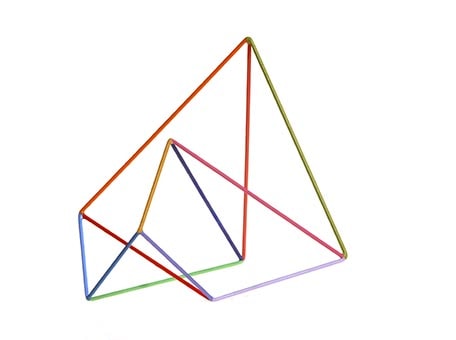 Comprising a new sculptural work by Robert Owen in a limited edition of 45 unique states, the 2006 Gertrude Edition is a series of open cubes, which have been broken down and reconfigured into five different arrangements. The work plays upon the idea of “flowering” and continues Robert’s poetic and associative investigations into colour, form, and space. 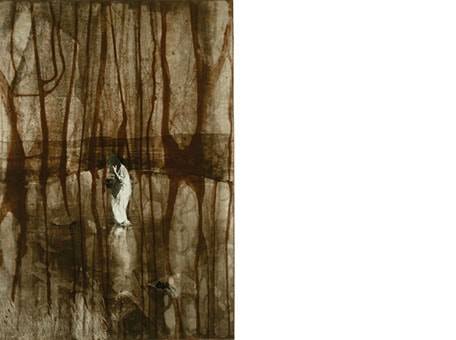 The 2005 Gertrude Edition comprises a new print by David Noonan, which continues his complex layering of histories and genres - from the romantic sublime and the historical gothic to 1970s bohemia and hippie culture. 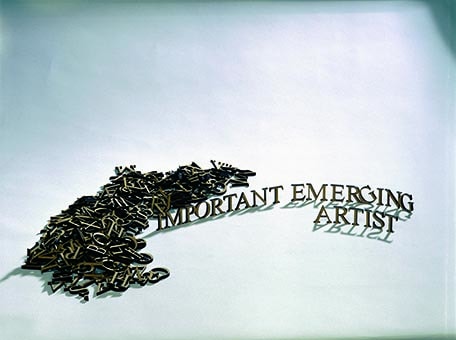 Emily Floyd's work for the Gertrude Editions continues her investigation into the ways in which artists, curators and audiences learn to internalize and reproduce art discourse. Parodying the hype that can surround young artists, Important Emerging Artist provides a humorous and insightful commentary on the cliches used to market emerging artists. 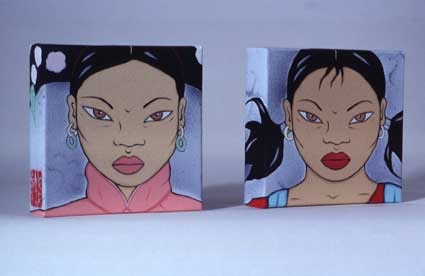 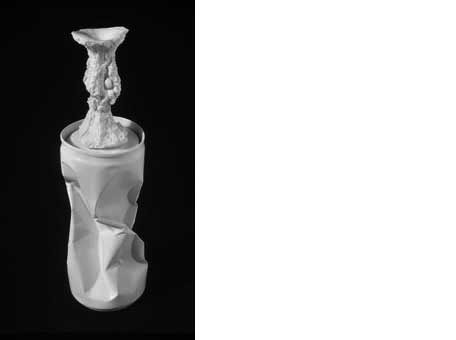